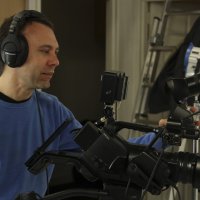 Send Email
Save
I was recently interviewed for an article coming up in “Regional Film & Video” and I thought it would be good to reprint it here. Not only cos of my ego but also as it answers a lot of the more common questions we get asked here at the studio. It gives a kind of potted history of where we, as a video production company and studio have come from and where we’re going. You’d already been an established video production company since 2003 so how did you come to open your own studio? I guess the truth was we were frustrated with the lack of local studios that really catered for filmmakers and video production companies based in Manchester. We had occasion to hire studios quite often and couldn’t find one that really “clicked”. Most of the time they were photography studios that also doubled as filming studios and all the inherent problems therein. Like what? Just the overall facilities offered; the wrong kind of lights, a space too echo-y to film in. Things that photographers needn’t care about but as video guys we felt could be improved upon. So you saw there was a market? I wish it was that mercenary! No really we built the studio for ourselves so we’d have somewhere where we film our productions and we knew the kit a) because it was ours and b) because we knew it was right for the job. And it grew from there? Yes, we barely get to use the studio ourselves for our own video productions, as it’s often hired out either people renting the space or hiring us along with it. What’s it mainly used for? Green screen. Hands down. We’ve filmed around 500+ green screens now. It’s kind of “our thing”. How did that start? I think people trust us. We know what we’re doing. If you hire us we’ll set up the lights with you. I know when I first started out, especially in a studio shoot, I hadn’t clue what to do with the lights and help wasn’t that forthcoming. In green screen it’s even more vital to get it right. It’s not just a matter of painting a wall green and throwing a light on it, it’s putting the right lights in the right place. I think if you look at our website guestbook you’ll see most of the comments are thanking us for our help on a green screen or chroma key shoot. I think it’s tricky too for a lot of young, maybe inexperienced companies given a brief to film a green screen video. You go to other studio spaces and say “Do you do green screen” and they say yes. They paint a wall and then your left to fend for yourself. That was certainly my experience when I first started and needed a green screen studio. I’d have appreciated any advice let alone the assist of someone who’d done it. What do you think is the bit of kit that makes you a “go to” place for video companies? The autocue without a shadow of a doubt. It just makes pieces-to-camera easier. I by easier I mean in terms of time and, just overall professionalism. I’ll give you a real world example. We have a client, whom I’ll not name. They used to shoot very complex pieces-to-camera. And by complex I mean wordy it was always to do with compliance so not only did it have to be right, it had to be said right. Their regular presenter used to record the script into a voice recorder and then play it back through an earpiece as they filmed him. This meant he’d obviously often get lost partway through. They also would occasionally hear the earpiece through his dialogue. It meant they’d arrive at 8 or 9 and be at the studio til 6pm. So when we got the teleprompter we offered it to them for free, just to test it. That day they went home at 2pm and they’ve used it every shoot since. It’s a huge bonus on a shoot as it means you spend less time worrying if the presenter is going to say the right words and you can spend more time on how they say them. It’s a boon to presenters too and quite frankly it mans you can get more done. How complicated is the autocue to set-up and operate? As far as operation it’s fiddly more than complicated. Just matching the speed of the scrolling with the natural cadence of the person speaking. We can offer the teleprompter with an operator or we can train someone up on the day to be honest. We’d set up the actual autocue on the day on whatever camera it was to be used on. Yes, I note you do offer technical support to hirers. Is that free? Yep, we offer one hours technical support as part of our hires and that’s free. It can be just helping people get started or it can be just lending a hand throughout the day. To be honest though we don’t really time it so it’s not like after an hour we slope off to the cinema. We’re about if you need us and if you need a bit more help we can offer crew. To be continued. Kristen Gibson is owner and operator of Galleon Productions and Galleon Studios who are the only fully independent video production company in the North West to operate their own HD studio.

As owner and founder of Galleon Productions I am proud of my company's abilites to offer digital video solutions to companies large and small. These include:

How to thrive through changing times

The power of a simple question!

HOW A MOBILE APP CAN HELP YOUR SMALL BUSINESS